There have been several times that we have wondered what is going on but never really knew where to look. Now, at least for Utah, there is a site that lists many cultural events. From the website:

"Whether you’re a local looking to get out and play or a visitor looking for fun things to do during your stay, NowPlayingUtah.com has just what you’re looking for, offering endless ideas of things to see and do throughout the state. Here you will find a comprehensive statewide calendar of events that allows you to search by date, location, category, venue, artist and more. Not only that, but NowPlayingUtah.com also provides easy access to dates, times, maps and direct links for purchasing tickets."

Helpless Man! Helpless Man! | I Love You Recipes: "My wife thinks that I wield what she calls the spell of the Helpless Man. According to her, this incantation causes females to rush to my aid. Women, she says, are especially vulnerable inside gift stores, jewelry stores, and the aisles of grocery stores that don’t feature chips, beer or frozen items that turn to dinner inside a microwave oven.

My response to this tomfoolery is to chuckle and change the subject. For any man of my age and girth knows that the days of spell-casting are long, long gone. But my Honey Bunny insists, even to maintaining what she calls her list of empirical proof. I recently asked to see this mysterious list, and made a few notations."
Posted by Matthew O. Smith at 4/25/2008 02:45:00 PM No comments:

Kids tell: HOW DO YOU DECIDE WHO TO MARRY? 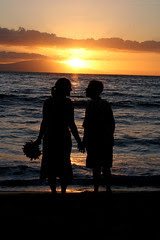 IMG_4673
Originally uploaded by mariacaridad
HOW DO YOU DECIDE WHO TO MARRY?
(written by kids) -----

You got to find somebody who likes the same stuff. Like, if you like
sports, she should like it that you like sports, and she should keep the chips and dip coming. -- Alan, age 10

No person really decides before they grow up who they're going to marry. God decides it all way before, and you get to find out later who you're stuck with.. -- Kristen, age 10
[Sure kid, blame God!]

WHAT IS THE RIGHT AGE TO GET MARRIED?
Twenty-three is the best age because you know the person FOREVER by then.
-- Camille, age 10

HOW CAN A STRANGER TELL IF TWO PEOPLE ARE MARRIED?
You might have to guess, based on whether they seem to be yelling at the same kids.
-- Derrick, age 8

WHAT DO YOU THINK YOUR MOM AND DAD HAVE IN COMMON?
Both don't want any more kids. -- Lori, age 8

WHAT DO MOST PEOPLE DO ON A DATE?
Dates are for having fun, and people should use them to get to know each other. Even boys have something to say if you listen long enough. -- Lynn , age 8

On the first date, they just tell each other lies and that usually gets them interested enough to go for a second date.
-- Martin, age 10

The law says you have to be eighteen, so I wouldn't want to mess with that.
- - Curt, age 7

The rule goes like this: If you kiss someone, then you should marry them and have kids with them. It's the right thing to do. -- Howard, age 8


IS IT BETTER TO BE SINGLE OR MARRIED?
It's better for girls to be single but not for boys. Boys need someone to clean up after them. -- Anita, age 9 (bless you child!)

HOW WOULD THE WORLD BE DIFFERENT IF PEOPLE DIDN'T GET MARRIED?
There sure would be a lot of kids to explain, wouldn't there? -- Kelvin,
age 8

Everybody gets thorns or slivers stuck in their fingers every once in a while. Those sharp little splinters that are so easy to get in and so difficult to remove. It is amazing how such a small object embedded in the skin can hurt so much. Sometime they even require tweezers and a magnifying glass to pull it out. But oh the relief once it is out.

Sometimes my kids want to leave it in. They would rather live with a splinter in the finger rather than have to suffer the pinch of the tweezers. What they do not understand is what happens when you let something fester. Leaving a sliver in can lead to infection, gangrene and in extreme cases, losing the limb or even death. No one would ever leave a sliver in if they could help it.

In every relationship there are things that get under the skin. A thoughtless remark, a forgotten event or a heartless laugh can all feel like a little splinter in the soul. Like the splinter in a finger, these relationship splinters should also be removed as soon as possible. Letting an offense or hurt feeling fester can be as dangerous to a relationship as an infected wound is to the finger.

When couples have been married for a long time, one thing they seem to have in common is that they never say unkind or derogatory things about each other. Does that mean that there have never been hurt feelings? Of course not. It simply means that they have learned to not let things fester.
Posted by Matthew O. Smith at 4/18/2008 06:21:00 AM 2 comments: