Pearl Dreams
Originally uploaded by noqontrol.
As I mentioned before, after Valentine's Day is a great and unexpected time to get a great deal on some romantic gifts. You can either surprise your sweetie now or keep it until a special occasion.

One such deal is an in-store sale going on through the month of February at My Princess Pearls. If you buy a necklace, they will throw in a pair of earrings for 25 cents. It is a socially responsible sweet deal.

What is the point of Valentine's Day anyway? 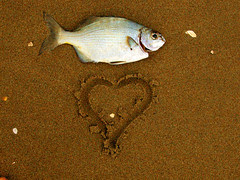 Valentine's Day was never the same.
Originally uploaded by Walsh.
Valentine's Day has come and gone. The flowers are wilted, the chocolate is eaten, the cards are stored and the jewelry is locked safely away. The day of love is passed.

"What is the point?" A coworker asked me. We were observing the people, mostly guys, get the traditional Valentine's Day gifts, at mostly inflated prices. Is showing affection a once a year event? Can't we show affection all year long?

The answer is yes, your sweetheart needs love, attention, affection and appreciation all year long. None of those things needs to cost money or even a lot of time. A simple card, a smile, a compliment, a small surprise, or just holding hands cost neither time nor money.

When making a chain, it is not one large piece of metal, but a lot of little pieces joined together, one at at time that creates a strong and durable chain. Likewise, a single grand act does not forge a lasting bond of love. Love is forged a link at a time by small simple acts perfomed often.

IHOP: "Join IHOP to celebrate National Pancake Day (also known as Mardi Gras, or Shrove Tuesday) on Tuesday, February 20, 2007. From 7 a.m. to 10 p.m., we’ll give you one free short stack (three) of our famous buttermilk pancakes. All we ask is that you consider making a donation to support local children’s hospitals through Children’s Miracle Network, or other local charities."
Posted by Matthew O. Smith at 2/20/2007 09:12:00 AM 1 comment:

Yes, Valentine's Day is fast approaching. Finding that perfect gift that fits in the budget can be a challenge. Here are some online gift ideas, many discounted or with special coupon codes. Don't wait until the last minute, again.

Need to know how to hint to your husband or wife on what to do for valentine's day? You can show use some of these links for ideas. I also like to keep a wish list over at Amazon.com

Note: This post will be pegged at the top until Valentine's Day 2007. Also, I will add more deals as I become aware of them.

Over the last couple of years there have been many great posts with unique Valentine's Day gift ideas. If you are looking for traditional gifts like cards, jewelry, flowers and chocolates there are other places to find that kind of stuff.


The following list contains the other gifts, gifts that are unusual, mostly inexpensive and a lot of fun.

Humor is such an important part of romance. Most Valentine's Day gifts are not designed to make the recipient laugh. That makes an anti-gift that much more effective this time of year

Twice I have surprised my sweetheart with a singing telegram on Valentine's Day. It has been one of the most memorable gifts she has ever received.

Instead of store-bought, try hand made. Your sweetheart will love knowing that you took the time and effort to write a love letter.

Also works with fortune cookies. Be sure and make some of them specific to you and your sweetheart.

A scavenger hunt is a great idea for Valentine's Day. It adds a sense of fun, wonder and anticipation.

Thoughout the Internet, there are various sources of free printable Valentine's Day coupons.

Out of the mouths of babes 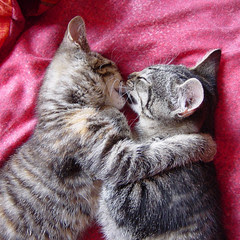 I think I like u....
Originally uploaded by .Storm.
Here are a couple of quotes on love I found floating in the internet flotsam.

"Love is when you kiss all the time. Then when you get tired of kissing, you still want to be together and you talk more. My Mommy and Daddy are like that. They look gross when they kiss"

"Love is like a little old woman and a little old man who are still friends
even after they know each other so well."

My wife and I were interviewed for a local radio show, Mornings with Grant and Amanda on KSL. The interview was part of a feature they are doing on Valentine's Day. The interview was a lot of fun. We talked about the gifts you should give and what is not a good idea. It was supposed to be broadcast today from 5 AM to 9 AM. 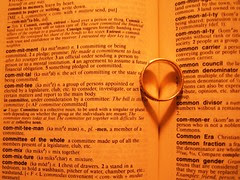 Commitment
Originally uploaded by *Sherry*.
When you make a commitment to a relationship, you invest your
attention and energy in it more profoundly because you now experience
ownership of that relationship.

The greatest blessing in marriage

It'll Never Die
Originally uploaded by ~Madeeha~.
Perhaps the greatest blessing in marriage is that it lasts so
long. The years, like the varying interests of each year, combine to
buttress and enrich each other. Out of many shared years, one life. In
a series of temporary relationships, one misses the ripening,
gathering, harvesting joys, the deep hard-won truths of marriage.

My wife really likes the pearls she has gotten from My Princess Pearls. The nice thing is that are having a sale for Valentine's Day. Not only that, but the company is setup to benefit the people who need it most. From the site:

Dedicated to changing lives by importing handcrafted genuine pearl jewelry from Southeast Asia. Every purchase from My Princess Pearls helps feed, educate, clothe, and create jobs for disadvantaged families in Southeast Asia. Each piece is crafted with genuine pearl jewelry is hand crafted by highly trained women using salt and freshwater pearls from all over the world. The grade A lustrous pearls are available in 7 natural colors: white, black, gray, pink, peach, peacock, bronze and 6 natural shapes: biwa, siapao, round, rice, baroque, and button. The original designs are available in styles perfect for every occasion from infant bracelets to career wear. Click here for our story!

Sexy Red Or Forever Young: Which Rose Will You Buy For Your Valentine?


Copyright © 2007 Wesley Berry, AAF
Believe it or not, Valentine's Day-the most romantic day of the year-grew out of the imprisonment of a priest in the days of emperor Claudius II. Though it had a rather ominous start, today Valentine's Day is a day when we give gifts of flowers and candy to our loved ones to remind them of how much they mean to us.

In the year 270 A.D., Roman emperor Claudius II banned marriage believing that the men of his country would be more likely to join his army if they were unmarried, rather than married men who would be leaving wives and children behind. But, Valentine, a priest in Rome, fervently disagreed with the decree. He continued to perform secret ceremonies to join couples in matrimony. His defiance cost him his life.

When the emperor discovered that Valentine was disobeying his law, he ordered Valentine to be imprisoned and sentenced to death. But, during his imprisonment, Valentine was befriended by a prison guard's daughter. In gratitude for her friendship, Valentine wrote her a note shortly before his execution and signed it, "From Your Valentine."

Ironically, Valentine was executed on February 14th, an ancient Roman holiday honoring Juno, the Roman goddess of marriage. February 15th began the Fest of Lupercalia, a celebration of fertility. On the eve of the festival, a young man would draw a slip of paper from a jar. On the paper was the name of the young woman with whom he would be paired for the festival. Often these pairings led to marriage.

Today, florists begin gearing up for Valentine's Day weeks in advance. Many track their sales from years to years to determine what their customers are buying to ensure they have the right amount and kinds of flowers on hand.

Florists like Patrick Anex, of Washington Floral Service in Tacoma, Washington, even send their customers a reminder note indicating what they purchased last Valentine's Day so that they can pre-book their orders. In fact, his reminders are so successful that 85 percent of his Valentine's Day 2007 orders were pre-booked a month in advance.

Wholesalers who fill the orders placed by florists indicate roses are definitely among their biggest sellers for Valentine's Day. The top rose varieties are:

To be certain your florist is able to fulfill all your Valentine's Day flower needs, be sure to place your order early. Your florist will be happy to assist you in choosing the perfect flowers all your special Valentines.

Heart within a Heart

Heart within a Heart
Originally uploaded by Simian Fan.
I just really like the picture and thought to share it.